How HDPE Milk Jugs Are Produced (and a Better Way) 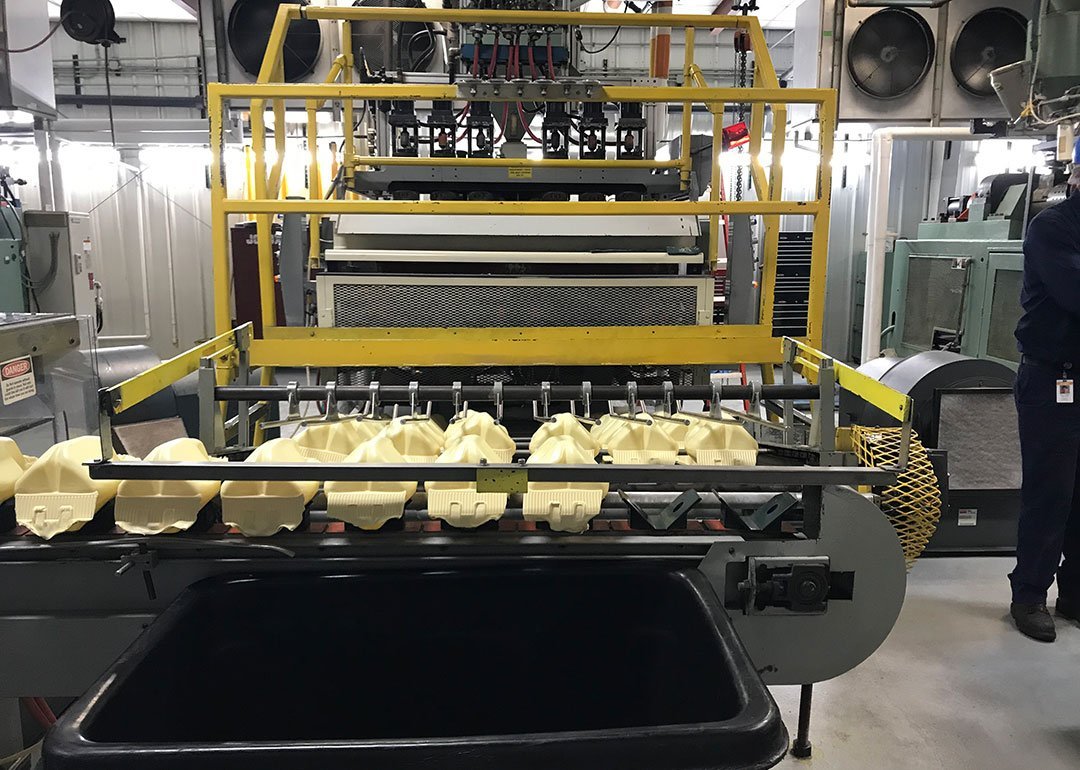 Or in the semblance of a now famous rant – “Process! Milk jug producing process! We are not talking about profit, we’re talking about process – not profit, process.” (For those not familiar with the reference, google rant regarding practice) 😃 Did you know that most dairy plants produce their own HDPE milk jugs? They do!

In this article, we explain the current production process, and then we’ll introduce you to a better way of going about it. If you have ever wanted to know how HDPE milk jugs are produced – and learn about an alternative to that cumbersome, costly process, you are in for a treat.

How does the extrusion blow molder work?

Good question! Well, it takes high density polyethylene (HDPE) resin that comes in pellet form and melts it. Then it flows down in a tube of hot plastic. Each mold clamps the tube of hot plastic, and with a shot of air into the mold, the plastic forms into the shape of your everyday milk jug.

How does my HDPE milk jug look after it has been formed?

You can see the form of the milk bottle in the pictures below. You’ll also see there is a lot of extra plastic around the bottle. That is where the molds have to close and hold the form in place. The good news is that all of the extra plastic gets trimmed off and reused in the process as regrind, so it is not wasted.

The bad news is that the trim knives often get dull, so you get rough edges around the handle. And more importantly, around the top of the bottle.

Why is that bad news? Because the top of the bottle is already soft, which makes it difficult to put on a cap that seals tightly. When the knives get dull, the cap seal becomes even worse.

The milk leaks from the jug during transportation because of the rough roads that shake the jugs on their way to your store. That is why sometimes, when you pick up your milk jug, it feels sticky on the outside.

How fast do these machine produce HDPE milk jugs?

A machine that is properly operating produces a set of bottles about eight times every minute. That seems like a lot, but is it? Like Einstein said, “it’s all relative.” (I think he said something like that) In reality, compared to other processes, this is quite slow.

Why don’t dairy plants use bigger or faster machines for their HDPE milk jug production?

That’s another great question! Unfortunately, it is not that easy. The laws of science dictate that it takes a certain amount of time to cool the bottle while it is in the mold.

And while there are ways to improve this cycle time slightly, any major improvement is not possible. As for the size of the machines, that is dictated by how many bottles the dairy plant wants to produce.

You see, when they start melting the plastic, they have to keep it melted and flowing like a slow river. If they don’t do that, the plastic will start to cool and not flow well.

How do the operators turn the blow molding machine on and off?

They don’t. Once they melt the plastic, they have to keep it hot and flowing – so they don’t turn it on and off. The machines operate 24 hours a day and often 7 days a week.

In contrast, the filler does not usually run 24 hours a day. Typically, the dairy processors only fill their milk jugs for about 10 or 12 hour per day, 5 days a week.

That doesn’t make sense, what do they do with all the milk jugs they produce?

I know this will not make a lot of sense, but they just keep producing them and putting them into plastics bags. Then the next day, when they start their filling machines, they take them back out of the plastic bags and put them onto the production line, just like you see below.

Yikes! That must require a lot of floor space for storing empty bottles.

Oh, yeah. Some dairy plants store their milk jugs in warehouses like you see below.

Some just place their milk jugs in a truck trailer and store them in their yard. Then they bring them back into the plant the next day.

Other dairy plants choose to spend a LOT of money putting in very expensive storage racking systems to store their HDPE milk jugs. You can see an example of that below.

Wow! I can’t even see all the bottles in this storage system. Why would someone put in all of these conveyors for empty milk jugs?

It all has to do with eliminating the bagging and de-bagging process we discussed above. But as you can see, to assure a steady supply of bottles to the filler, you need a LOT OF EMPTY BOTTLES!

Not only does that take up valuable floor space for a typical dairy plant, but the ongoing maintenance of the cable conveyor, and the chances of production disruptions, are huge.

There is a much better way to produce milk jugs!

Wow! Those bottles on the right are SOOOOOO CLEAR! How did you make the milk jugs so I can see what is inside of them?

It all has to do with the type of plastic we use. You see (pun intended 😁) the bottles on the right are made of polyethylene terephthalate – more commonly known as PET.

This is the same type of plastic they use to put soda into a 2L container. In fact, for soda, PET is just about the only plastic material used for any size (2L or smaller).

Why don’t dairy plants use PET plastic for producing their milk jugs?

The biggest reason is that up until very recently, you could not get a handle on the bottle like the ones you see above. Since a gallon of milk weighs about 8 pounds, you definitely need a handle if you want to pour yourself a glass.

Yes. They are made in a two-step process. First, you make what looks like a test tube called a preform. This is made during a typical 24 hour/day operation. Then the preforms are sent to another machine called a blow molder.

In the blow molder, the preform is reheated in an oven until the plastic is soft. Then it enters into a mold that is the shape of the bottle that you want it to look like. Like before, it is injected with air, and the preform is blown into a bottle just like a balloon. Since it is in a mold, it comes out looking like your bottle.

Here is a diagram that shows the entire process:

How fast is this blow molding process?

We can produce bottles as fast as you can fill them! Not only that, but we can make the bottles ONLY WHEN YOU NEED THEM!

Remember all that warehouse space, truck trailers, and conveyors being used to store empty bottles? All that is GONE.

Remember all that labor that went into putting the bottles in bags, and then taking them out of the bags? All that is GONE.

In fact, see this gaylord of preforms below? One truck load of them replaces almost SEVENTEEN trucks of empty bottles.

That is a lot of trucks that would come off the road! And it’s a lot of floor space freed up within a typically very congested processing plant.

If I own and operate a milk processing company, will I have to make a lot of changes to my filling operation to implement this new system?

Actually, no! You see, when the clear PET milk jug was designed, it was designed PURPOSEFULLY to replace the soft, leaking HDPE milk jug. They are the same dimensions, so everything on the filling side stays exactly the same.

Shhhhhh, I’m going to let you in on something else that we can discuss another time. This new bottle will also help the dairy processors get rid of all of those milk crates that cost so much to buy, clean and reuse (not to mention to replace).

As we know, everyone loves to keep those crates in their basement to store their old balls of wires and other stuff we will never ever use again. 😊

But, we can talk about that on another day.

Does it cost a lot of money to get rid of the old system and buy the new one?

We have the ability to help each company do a cost comparison to capture their current cost of operation, and the savings associated with this new bottle. We have even helped some companies look at leasing the equipment so that their SAVINGS ACTUALLY PAY for the conversion. That means they can add dollars to their bottom line from day one.

Last question, if someone wanted to do this, how would they go about it?

That is a great question to finish on. We take care of EVERYTHING. We can provide the engineering, the best systems and the installation. Our clients don’t have to worry or stress about anything except to say – LET’S GO!!

Anyone can get started by visiting our website at BottleOne.com or clicking on the link below.

Have a blessed day.